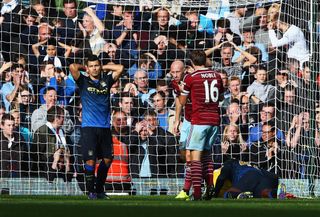 West Ham manager Sam Allardyce labelled Aguero's tackle on Mark Noble as "dangerous", and referee Martin Atkinson's failure to punish the Argentine leaves him open to further sanction from the English FA if they cite the incident.

Allardyce seemed puzzled as to how the tackle went unpunished via a card, and said Noble was not happy with the treatment.

"Mark was complaining about it at half-time. It was a dangerous tackle and the referee was right in front of it," Allardyce said, following West Ham's 2-1 Premier League win.

The studs-up challenge could see Aguero miss the league derby with Manchester United at Eastlands on November 2.