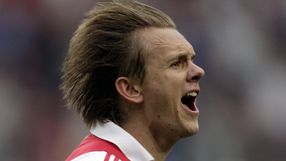 Heerenveen, sixth in the league, were reduced to 10 men after three minutes with keeper Brian Vandenbussche sent off followed by a converted penalty from Theo Janssen.

Ismail Aissati doubled the lead before a superb drive by Siem de Jong (pictured) settled the match after 25 minutes. De Jong added a second on the stroke of half-time and completed his hat-trick in the second half.

Ajax are top with 61 points after 29 match, three ahead of AZ Alkmaar who were held to a 2-2 draw at home to Twente Enschede who remain third with 56 points.

U.S. international Jozy Altidore headed home the opener for Alkmaar after three minutes but a shot from Luuk de Jong after 31 minutes levelled the match.

Altidore's second goal 20 minutes before time restored the lead for the home side but in injury time Emir Bajrami salvaged a point for Steve McClaren's team with a close range header.

Feyenoord moved into fourth with 55 points after a 0-0 draw at Roda JC Kerkrade. PSV Eindhoven were stunned 2-1 by mid-table RKC Waalwijk and slipped to fifth with 54 points.

Waalwijk sank PSV, who won the Dutch Cup on Sunday, with two goals in three minutes between the 55th and 57th. Jan Vennegoor of Hesselink pulled one back two minutes before time.