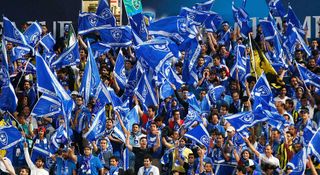 Carlos Eduardo scored a hat-trick as Al Hilal became the first side to reach the semi-finals of the AFC Champions League courtesy of a 3-0 second-leg win over Al Ain on Monday.

After a bad-tempered first meeting in the United Arab Emirates had ended 0-0, Al Hilal seized control of the tie with two goals just before the half-time interval.

Nicolas Milesi's inswinging free-kick was nodded home by Carlos Eduardo in the 43rd minute to break the deadlock at the King Fahd Stadium in Saudi Arabia.

Having seen Marcus Berg spurn two excellent early opportunities to grab an all-important away goal, Al Ain were left with a mountain to climb when their opponents struck a crucial blow in first-half stoppage time.

Milesi was once again the architect, producing a chipped pass to pick out the unmarked Carlos Eduardo, who controlled with his knee before smashing a volley beyond visiting goalkeeper Khalid Essa.

Any hopes of Al Ain launching a second-half comeback disappeared when the Brazilian completed his treble by converting a one-on-one opportunity in the 74th minute.