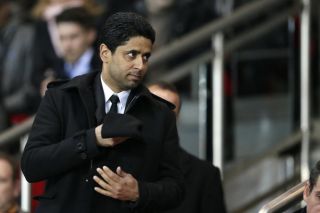 PSG have risen from Ligue 1 also-rans to European powerhouses in recent years courtesy of a spending spree that has seen the French capital club pay out close to €400 million in player transfers over the last three seasons following the Qatar Investment Authority's May 2011 takeover.

Laurent Blanc's men will win a second straight Ligue 1 title with victory over Rennes or if Monaco fail to beat Guingamp a week on Wednesday.

But PSG, along with Premier League side Manchester City, have reportedly been found to have breached FFP rules and are set to face sanctions from European football's governing body as a result.

The club's sponsorship contract with the Qatari Tourism Authority - which is said to have earned the club approximately €200 million in 2012-13 - has raised eyebrows, and UEFA president Michel Platini has since conceded he is unsure whether PSG have complied with FFP regulations.

However, Platini revealed that it is unlikely that any club will be banned from European competition for breaching FFP rules, and PSG president Al-Khelaifi is not expecting a punishment to be handed down.

"I repeat that there is no reason to take sanctions against us," Al-Khelaifi said.

"I am confident we are well within the regulations, there is no problem. I do not think there will be a decision against us.

"We are looking and talking with UEFA, but I'm very confident."