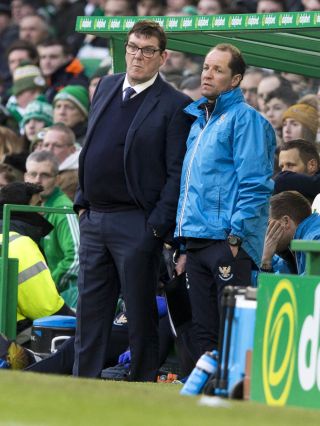 Alec Cleland was “shocked” when Tommy Wright told him he was leaving St Johnstone.

Cleland spent almost two years as Wright’s assistant having been on the coaching staff since the Northern Irishman arrived at the club in 2011.

But the former Dundee United and Rangers full-back did not see Wright’s departure coming.

Cleland was installed as caretaker manager after Wright ended his seven-year reign at the weekend.

“When I first spoke to Tommy I was shocked because I didn’t see it coming at all,” he told Saints TV.

“I know we had a poor start to the season but we were one of the form teams after the New Year. We were pushing for top six, which was always our aim.

“I’m happy in a way he was able to make the decision on his own terms but I’m sad because I saw myself working with him for another season or two, because I enjoyed it so much and learned so much off Tommy.

“So I’m happy but a bit gutted as well.

“He makes you work hard but when he sees you work hard, he will work harder for you. That was a great talent Tommy had, not just in his staff but his players as well, getting them to work really hard. That was instilled right through the club from top to bottom.”

Cleland will liaise with head of football operations Kirsten Robertson and others as Saints prepare for the return of football.

“We have enough good people at the club to move us forward,” he said.