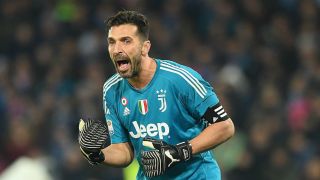 Gianluigi Buffon will return to the Juventus squad next week, head coach Massimiliano Allegri has confirmed.

The veteran goalkeeper has not played since Juve defeated Napoli 1-0 on December 1 due to a calf injury, with Wojciech Szczesny deputising in his absence.

Juventus, who trail leaders Napoli by four points in Serie A, return to action after Italy's mid-season break against Genoa on Monday.

That game appears too early for Buffon, but the 39-year-old will soon be back between the posts.

"Next week Buffon will be available, fortunately Szczesny did very well in his absence," Allegri told a media conference.

"It's important for us to have him back in the squad. This month-and-a-half of forced rest could serve him well for the end of the season."

"His [Dybala's] condition will be evaluated day by day," he said.

"Howedes is recovering but he needs time, Cuadrado is not available, [Mattia] De Sciglio could start."