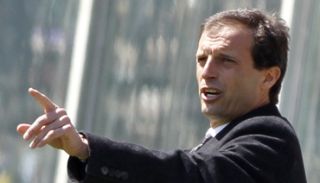 Allegri also criticised the interruption, during which warnings were broadcast to the fans over the public address system, as an unsuccessful compromise and said that forward Mario Balotelli was being increasingly taunted by racist abuse.

"People should go to the stadium to see two teams battling each other on the pitch, not this sort of thing, it's a place for the uncivilised," he told Milan's official website.

"Above all, the culture in Italy is backward.... tonight we had racism, laser beams flashed in the eyes of players and an interrupted match."

Play was stopped early in the second half by the referee because of chanting by visiting Roma fans aimed at Balotelli and warnings were broadcast over the public address system. The game resumed immediately afterwards.

"Stopping the game doesn't work, it's a happy medium and like all happy mediums, it doesn't do anybody any good," said Allegri.

"Balotelli was defeated this evening, he gave everything, but he is 22 and subjected more and more to racist chants and that doesn't do him any good."

Allegri went on to criticise midfielder Sulley Muntari, sent off before half-time for man-handling the referee as Milan players protested against a decision.

"Above all, Sulley has made a mistake but that is in the past," said Allegri. "The boy is mortified and has penalised us by leaving us with 10 men."

Milan still need to win at Siena in their last game to clinch third place and the Champions League play-off spot.

"We need to stay calm, prepare well and play the game in Siena," said Allegri, whose future is a constant subject of speculation.

"I have never thought that could be my last match on the Milan bench, because I'm the coach of this team and we have a target to reach."