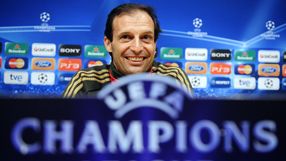 Milan, who have won seven European Cups, managed to hold Barca to a 0-0 draw in the first leg at home last week and fancy their chances of preventing Pep Guardiola going for a third Champions League crown in four years.

"It's a fascinating game because it is between two of the strongest teams around," Allegri told a delayed news conference, after his side's flight was held up by strike action.

"Whoever wins this game will probably go on to reach the final."

The winner of Tuesday's match will face either Chelsea or Benfica in the semis later this month.

"Barcelona are in fantastic form as they demonstrated against Athletic Bilbao," Allegri added.

"We will have to play even better than we did at the San Siro."

Lightning quick Brazilian forward Alexandre Pato, who scored against Barca at the Nou Camp in the group stages in September, has been included in Milan's squad after having treatment on a nagging back injury.

"Pato has come after a month out of the team," Allegri said. "He has trained and could be important for tomorrow's game."