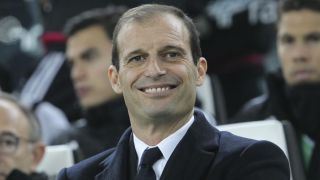 Juventus coach Massimiliano Allegri is focused on overhauling Napoli after the champions kept pace with the Serie A leaders courtesy of a 1-0 home win over Roma.

That goal secured Juve's 11th consecutive Serie A win, leaving them two points behind Napoli, who won 4-2 at Sampdoria earlier on Sunday.

And Allegri is pleased with his side's progress after a torrid start to their quest for a fifth straight Scudetto.

"The club evaluated the situation, changed a lot of players over the summer and brought in youngsters, so it needed a bit of patience," he told Sky Sport Italia.

"In the same way, we need balance during this moment of 11 straight wins.

"Napoli are doing exceptionally well, we must try to do even better to catch and leapfrog them."

It looked as though Juve's stunning sequence would come to an end as Roma proved a stubborn opponent until Pogba and Dybala combined to great effect.

"It was a difficult game because Roma closed us down," Allegri said.

"We did well in the opening 20 minutes, but Dybala and Mario Mandzukic weren't finishing off the service. Dybala kept going too wide on the right in the first half and wasn't finding the spaces.

"Of course at the end he did score an extraordinary goal. It's not easy to get 11 consecutive victories in Serie A, especially after we used up a lot of energy against Lazio in the Coppa Italia on Wednesday."

"The important thing is to maintain this physical and psychological condition."

Pogba was sporting a typically exuberant leopard-print haircut during the game, but it is not a style Allegri is planning to copy.

"I don't have enough hair for that," he said. "These guys have seven or eight hairdressers who come and go. It's not like in my day."