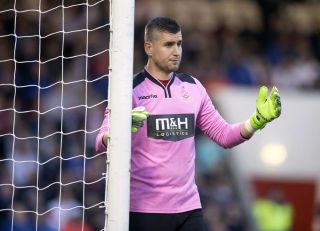 Alloa Athletic goalkeeper Neil Parry may need plastic surgery after a serious injury against Hibernian, according to his manager Peter Grant.

Parry collided heavily with goalscorer Christian Doidge for the opening goal and was replaced by Chris Henry straight away.

“He’s got a bad one, he’s going to hospital now so they’re talking about even a bit of plastic surgery being needed.

“He was brave to come at the opportunity and it was a complete accident, so we’ve got no problems. It’ll probably make it him a bit nicer looking!

“His nose was bleeding and he’s got a scar on the top of his head, that’s the concern. I think the wound is too wide so that’s why they’re talking about plastic surgery.”

After Parry left the pitch, Hibernian continued to threaten and wrapped up the win five minutes from time thanks to a Tom James strike.

Hibs manager Paul Heckingbottom admitted his side needed to change things at half-time after going into the interval goalless.

Florian Kamberi and Daryl Horgan chances aside, Hibs lacked ideas in the first half and brought on Scott Allan and Fraser Murray to seal the game late on.

“It was tough, I thought first half we were sloppy with the ball, so we had to change things at half time,” Heckingbottom said.

“With a team really sitting in against you and not much space, the shape we were playing played into their hands a bit.

“We had to change it and try and get some real width to stretch them. I felt we needed a tactical change and had to make space for Scott (Allan) and Fraser (Murray).

“We were the better team all the way through, but we were making it easier for them than it should have been.”