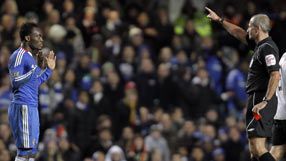 Ancelotti claimed Essien's straight red card for a two-footed tackle on Clint Dempsey in the closing minutes of champions' 1-0 Premier League win over Fulham was harsh.

"I don't like to judge the decision but maybe it was not a red card," the Italian, who will lose his midfield powerhouse for three games unless the club successfully appeal, told reporters after his side opened a four-point lead over Manchester United who drew 0-0 with Manchester City.

"But Essien out for three games will be a problem."

Lampard has been out since August with a groin injury but Ancelotti thinks the home match against Sunderland on Sunday could mark his return to the Chelsea engine room.

"He started to train with the team two days ago," he said. "He doesn't have a problem and he is showing confidence. He can start although I don't think he will be able to play 90 minutes."

After the 2-0 defeat at Liverpool on Sunday, normal service resumed for Chelsea as they made it six home wins from six in the league without conceding a goal.

"We started well from the beginning with a high tempo during the game, which we didn't do in the last game at Liverpool," he said, adding that he predicted City and United would draw.

"I said yesterday that Man City against Man United will be a draw and it was a draw so I am a good magician!" he said.

"We lost at Man City so Man United had a better result than us and they remain a very strong team, but it is good to have four points clear."