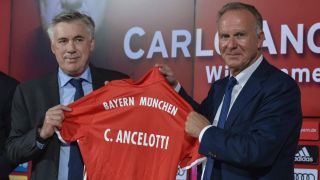 New Bayern Munich head coach Carlo Ancelotti says he wants to build his own legacy at the Bundesliga champions.

The former Real Madrid boss pointed out he is the second Italian to take charge of the club after Giovanni Trapattoni and hopes to be remembered as fondly as his compatriot – a Bundesliga winner in 1996-97 – at the end of his own spell.

Ancelotti was presented by Bayern on Monday after agreeing a three-year deal to replace Pep Guardiola, who has joined Manchester City.

He said: "I am the second Italian to take charge of the club after Giovanni Trapattoni – a legend. I hope that I also can leave a legacy here as he did.

"We want to be competitive in all the competitions. A manager can control everything with the help of the club apart from the result unfortunately. If I could control the results I would be a magician, but I am only a manager.

"The Bundesliga is a really interesting championship to be in. With [Borussia] Dortmund and Wolfsburg, it is a competitive championship. What I like is the atmosphere that you can see every single time, at every match, in the stadium with no violence and this is a good image for football."

Ancelotti, 57, insists he is not feeling the pressure of taking over at Bayern due to his vast experience at the highest level.

He continued: "A lot of people ask about the pressure. I have had the luck in my career to coach top, top teams – [AC] Milan, PSG, Chelsea, Juventus, Real Madrid.

"I know every top club wants to win, but honestly I don't feel a lot of pressure because I am used to it."

Ancelotti would not divulge any specifics regarding the futures of Mario Gotze and Mehdi Benatia, both of whom have been linked with departures.

The head coach said: "Like with Benatia, Gotze is still a Bayern player. I will train him and consider him while that is the case.

"I spoke with him a month ago and we both gave our opinions but what we said will stay private. As long as he is a Bayern player I don't have to think of other things."