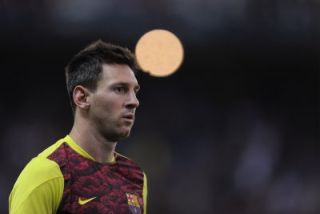 The Argentina captain will join up with the rest of Alejandro Sabella's squad for the FIFA World Cup qualifying fixture in September 10, despite Barcelona confirming that he had "bruised the femoral biceps tendon in his left thigh".

Messi suffered the injury during Barcelona's 1-1 draw with Atletico Madrid in the Supercopa de Espana first leg on Wednesday.

Barcelona also revealed that Messi will be monitored before a decision is made on whether he features against Malaga in La Liga on Sunday.

Despite those fitness concerns, he has been called upon to help his country continue their impressive qualification campaign as they aim to book their place for the World Cup in Brazil next year.

Javier Mascherano, Gonzalo Higuain, Ezequiel Garay and Federico Fernandez are all absent from the squad due to suspension.

However, Sergio Aguero returns after he missed his country's 2-1 friendly win over Italy.