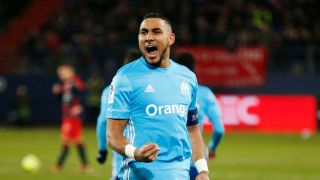 Dimitri Payet and Lucas Ocampos haunted Athletic Bilbao for a second time in the Europa League as Marseille cruised into the quarter finals 5-2 on aggregate.

Both Payet and Ocampos found the back of the net in the first leg at the Stade Velodrome last week and they were at it again on Thursday, Marseille running out 2-1 winners at San Mames.

However, their progress was marred by reports of trouble before the match between Marseille fans and security staff, while flares were also reportedly thrown from the travelling supporters.

That could well bring sanctions from UEFA, but on the pitch Marseille were excellent with the impressive Payet a shining light.

A marauding run, including a one-two with Kostas Mitroglou, was ended by Inigo Lekue's crude challenge, Payet converting the resulting spot kick with aplomb.

Ocampos took his opportunity early in the second period as Athletic gave him far too much room on the left, the Argentine cutting in and firing into the bottom corner – out of Iago Herrerin's reach.

Inaki Williams was lucky to stay on the pitch in the second half after escaping punishment for a challenge on Jordan Amavi when already on a yellow card.

He took advantage to halve the deficit on the night with a close-range finish after the ball ricocheted around the visitors' penalty area.

Any hope of an Athletic comeback quickly disappeared two minutes later, however, as Aritz Aduriz was shown a second yellow for a poorly-timed challenge on Ocampos, the striker having earlier been booked for dissent.

That enabled Marseille to comfortably see out the victory and ensure progression into the quarters, their first last-eight appearance in a European competition since the 2011-12 Champions League.