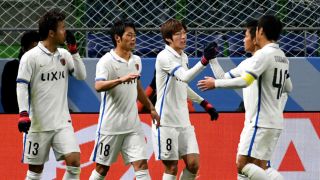 Kashima Antlers resoundingly defeated Atletico Nacional 3-0 to reach the Club World Cup final with a little helping hand from a piece of history.

Shoma Doi scored the opening goal of an enthralling semi-final in Osaka from the penalty spot after match official Viktor Kassai had used the Video Assistant Referees (VARs) system.

VARs is being trialled by FIFA at the tournament to aid with "match-changing decisions" and Kassai used the pitchside monitor to decide Orlando Berrio had fouled Daigo Nishi in the area.

But Kashima - the first Japanese side to reach the final - scored twice late on through Yasushi Endo and substitute Yuma Suzuki to book a date with Real Madrid or America, who play on Thursday.

Atletico were due to play Chapecoense in the Copa Sudamericana final before a plane crash killed the majority of the Brazilian side's first team ahead of the first leg late last month, and the Atletico fans unfurled banners in tribute to victims while a minute's silence was held before kick-off.

After a pulsating start, Atletico turned the screw as Mosquera's thunderous strike rattled the bar and Berrio's follow-up was cleared off the line.

But Kashima took the lead when Kassai, who initially failed to spot that Berrio had bundled Nishi to ground, reviewed the decision and awarded a penalty that Doi converted.

Naomichi Ueda had a gilt-edged chance to double the lead, but his thumping header was saved by Franco Armani, before Mosquera was denied by the bar again shortly before the break.

Kashima continued to defend resolutely in the second period and, with seven minutes remaining both Endo and Armani missed a left-wing cross, but the former responded quickly and cheekily backheeled into the open goal.

And two minutes later it was game over when Suzuki tapped in Mitsuo Ogasawara's low ball inside the six-yard box.