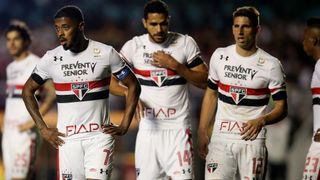 Sao Paulo coach Edgardo Bauza insists his side must stay calm if they are to have any chance of progressing to the final of the 2016 Copa Libertadores.

Bauza and Co. travel to face Atletico Nacional in the second leg of their semi-final on Wednesday, but have a mountain to climb if they are to avoid elimination in the last four.

Colombian side Atletico scored two late goals - both through Miguel Borja - to seal a shock 2-0 win in Brazil in the first leg of the tie last week.

The defeat was even harder to take for the Brazilians - three-time winners of the competition - with defender Maicon shown a straight red card before both goals were scored, keeping him out of the return leg.

However, despite facing a two-goal deficit, Bauza wants his side to stay calm and to stick to their usual game plan to come out victorious.

"We cannot come out to try and bite or kill," he said ahead of the clash in Medellin. "We have to play like we always play. We will try to rob the ball and see how we can make them pay.

"The game is difficult but no one is losing sight of the objective. We do not re-approach anything compared to last week."

With Maicon missing, which Bauza maintains the referee got wrong, former Uruguay captain Diego Lugano is expected to start in his place.

"It's very difficult, but there is a chance," the 35-year-old Lugano said. "The Sao Paulo shirt is a successful one, and it deserves that players fight to the end.

"We have to leave everything on the pitch, score as quick as possible to get a result. We dream of a final. We need a perfect match."

Atletico - one-time Libertadores winners - are looking to make their first final in 21 years, and coach Reinaldo Rueda says their run has captivated the nation.

"We have won the affection of everyone in Colombia, this team is for the country, and it is their grand representation," the 59-year-old said.

"At Atletico Nacional we have many internationals, and every single one of them are eligible for the Colombia national team."

He added: "Sao Paulo as a collective are strong, like all Brazilian teams, and they are very good offensively.

"Nacional are a mature group, they have spent many years suffering and trying to achieve this, and hopefully they get it because they deserve it."

The game is also set to be Marlos Moreno's last in Atletico colours, with Rueda confirming the 19-year-old is off to join Premier League outfit Manchester City.