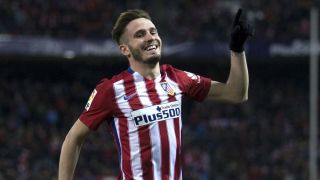 Atletico Madrid midfielder Saul says Diego Simeone's men will treat their Champions League last-four tie with Bayern Munich as if it were a final.

The La Liga side welcome Bayern to the Vicente Calderon on Wednesday for the first leg having seen off domestic rivals and holders Barcelona in the quarter-finals.

Saul, who has scored eight goals in all competitions for Atletico this season after establishing himself in the first team last campaign, believes they are set to face the most well-rounded side left in the competition.

But the 21-year-old stressed Atletico will give everything to match Pep Guardiola's Bundesliga leaders.

He told AS: "They [Bayern] are the most complete side, they have a lot of variety to their game and can attack through the middle or via the wings, and they're strong in the air.

"We will do what we always do; work as a team, fight to the death for every ball, treat the game as though it was a final, that's only way we will be able to compete against a top side like Bayern.

"The main objective is to win the game."

Atletico remain in the hunt for silverware on two fronts, sitting level on points with Liga leaders Barca, who are top courtesy of their head-to-head record with the capital club.

Asked about the prospect of winning La Liga and the Champions League, Saul added: "We're going to battle for both of them. One step at a time."