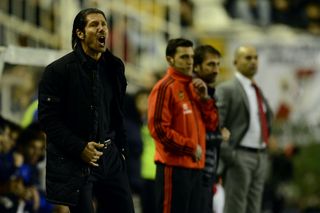 With the tie finely poised, Simeone expects Bilbao to start positively but claims he does not have a special plan as his side seek to secure a place in the last four.

"They (Bilbao) will be looking to start the game with a lot of intensity and then we'll have to respond, because they will be more confident," said Simeone.

"The game will be evenly matched and tight. We don’t have a formula as such for the game; we have a certain playing philosophy and we're not going to change it."

The former Argentina midfielder believes striker David Villa, once of Barcelona, can help his team-mates adopt the right attitude to defend their crown.

"He's used to playing to win and that’s good for the team," Simeone added.

"He is doing what we expected of him and we hope he can keep doing that. His numbers are more impressive with every game."