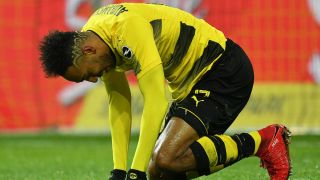 Pierre-Emerick Aubameyang has been dropped for Borussia Dortmund's home match against Wolfsburg in the Bundesliga, with the club citing "disciplinary reasons".

The Gabon forward's relationship with his employers has become increasingly fractured amid speculation he will leave Signal Iduna Park.

Reports emerged this month that a switch to Chinese Super League club Guangzhou Evergrande had been agreed, but Aubameyang remains a Dortmund player.

Dortmund confirmed on Sunday that he had been left out of the squad and it is not the first time he has been sanctioned in this way.

The 28-year-old was also left out for a match against Stuttgart in November, though – as on this ocassion – a more detailed explanation was not given.

Aubameyang has been prolific for Dortmund since signing for the German club in July 2013, scoring 98 top-flight goals.

Peter Stoger's side resume league action sitting fourth in the table, having won their last two games before the mid-season break, with Aubameyang scoring against Hoffenheim.