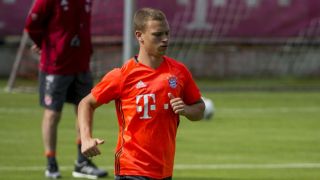 Bayern Munich defender Holger Badstuber is erring on the side of caution as he nears a return to the first team.

The 27-year-old has suffered from a chronic spate of injuries since 2012, making just 29 league appearances in that time after a damaging succession of knee, tendon, thigh and ankle problems.

Badstuber started for Bayern against AC Milan in the International Champions Cup in July, but lasted just half an hour before being replaced.

With Bayern set to get their Bundesliga defence under way at home to Werder Bremen on Friday, Badstuber knows he cannot rush back into action and suffer a further setback.

"I was gone a long time," he told Kicker. "It takes time to get back slowly again. With regard to the next level, it is important that I think in the long term.

"That is why I take my time.

"There is the international break [in early September] and then I think that I come back to the team.

"Whether it is a week earlier or later, it is important that I stick to it long term. That's my goal. That is why I am relaxed. I want to have a good structure and a good base.

"It's all good. I want to just take my time. I still have shortcomings, and I have to catch up to a good start with the team. I'll be back.

"Of course I would love to train with the team, but I need to feel good. As long as I'm not really ready, that does not help and the coach understands that."