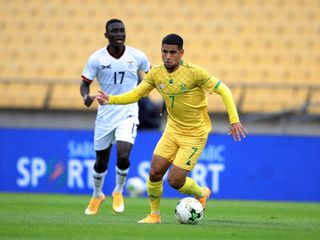 Bafana Bafana were forced to endure a 2-1 defeat to Milutin Sredojevic’s Zambia at the Royal Bafokeng Stadium in Rustenburg on Sunday afternoon, writes DYLAN APPOLIS.

South Africa came into this game off the back of a disappointing 1-1 draw with Namibia on Thursday evening, while Zambia suffered a 2-1 defeat to Kenya in their opening international friendly match during the current Fifa window.

The game got off to a rough start for Bafana as they were forced to make an early change when Lyle Foster was stretched off the field and subsequently replaced by Keagan Dolly after a rough aerial challenge in the opening minutes of the match.

Thabiso Kutumela nearly handed Bafana the lead in the 13th minute but saw his curling effort sail inches wide of the top right corner after collecting the ball on the edge of the area.

Zambia had a chance of their own on the half hour mark when Tandi Mwape rose the highest to get his header away, but directed his effort over the target.

Chipololo goalkeeper Sebastian Mwange came to his sides rescue a minutes later when Percy Tau forced him to tip the ball out for a corner after some great interplay with between the Anderlecht star and Teboho Mokwena. From the resulting corner, Madisha sent his header over the crossbar.

The Zambians should've taken the lead in the 39th minute but Lubambo Musonda was unlucky not to find the back of the net as his effort crashed against the woodwork with Bafana keeper Darren Keet well-beaten.

Neither side were able to find the opening goal as the game went into the break locked at 0-0.

Both teams threatened early in the second half but were struggling to break down the defence at either end of the field.

It was South Africa who drew first blood in the 66th minute when Tau played a superb through ball to Dolly, who beat the Zambian goalkeeper to slot the ball into an empty net to make it 1-0.

Bafana's lead was shortlived as Chipololo pulled a goal back 11 minutes later when Kelvin Kapamba found the net with a neat finish from the edge of the box.

Zambia continued to press South African and took the lead in the 81st minute when Chaniza Zulu slotted the ball home after Bafana lost possession of the ball in the middle of the park.

The home side pressed forward in search of an equalising goal in the closing stages of the game but Zambia held on to their lead until the final whistle to snatch a late victory against Bafana in Rustenburg.