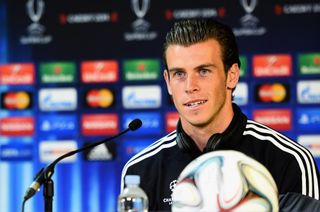 The Wales forward marked his first season in Spain by winning the Champions League and the Copa del Rey following his big-money move from Tottenham.

Bale will attempt to add another medal to his collection when Real face La Liga rivals Sevilla in the UEFA Super Cup in his home city of Cardiff on Tuesday.

The 25-year-old is relishing the prospect of featuring for the Madrid giants in his homeland, as he aims to build an impressive start to his career at Santiago Bernabeu, and he hopes a victory will be a sign of things to come.

Bale said at a press conference on Monday: "Every season we want to win every trophy we're in for.

"We'll be trying our best to win the Champions League and the Spanish League again.

"It's great to be back home but the most important thing is to win the game and the cup.

"We need to focus on that and not on me playing in my home town.

"It was a great season last year - winning trophies - but the most important thing now is to win the Super Cup and it doesn't matter who scores the winning goal.

"We'll work hard again to try and try to win the trophy."

Bale is ready to hit the ground running at the start of the new season after a more settled close-season without the transfer speculation that he had to contend with last year ahead of his move from Tottenham.

"I've had a good pre-season and settled in. It's nice not being the new boy, that's been good," he said.

"It's a lot easier having pre-season under your belt rather than waiting for a transfer to go through.

"I feel in better shape and can start the season with a better tempo."