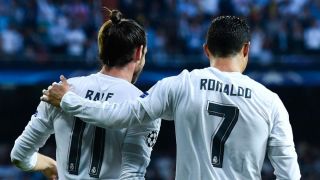 The Euro 2016 semi-final between Portugal and Wales at the Stade de Lyon will not be knowingly underplayed in Madrid, given the standing of the two superstar protagonists at a club where status is everything.

From Hal Robson-Kanu's quicksilver turn that almost sent three Belgium players scurrying out of Lille and back over the border to their homeland, to Renato Sanches blossoming on the big stage, there is enough to recommend about Wales and Portugal at this competition outside of the obvious.

But make no mistake, this is Ronaldo versus Bale; Gareth versus Cristiano; Galactico versus Galactico.

Ronaldo will play the 33rd major tournament match of his career against a nation competing at the elite level for the first time in 58 years. Unsurprisingly, it is he and not Bale that has previous in this type of duel.

In November 2013, he single-handedly fired Portugal to victory in a 2014 World Cup play-off against Zlatan Ibrahimovic's Sweden.

Ronaldo and Ibrahimovic traded five goals between themselves inside 30 dizzying second-half minutes at the Friends Arena, where Portugal prevailed 3-2 and 4-2 on aggregate. Of course, he scored in the first leg as well.

When a career that ranks him as one of the greats of the game concludes, this outing may be viewed as Ronaldo at the peak of his remarkable powers. Significantly, the match took place during voting for that year's Ballon d'Or and he would wrest the coveted prize from his rival Lionel Messi.

The former Manchester United favourite's ability to bend, break and mould a match to his considerable will, showcased so thrillingly on that night in Sweden, was unparalleled.

It is hard to argue Ronaldo is quite so formidable anymore. With 51 goals in 48 matches for Real Madrid last season, he still operates near a pinnacle most players would never dream of considering, but the sands of time are shifting.

There is a new economy to the 31-year-old's work for club and country - not seeking out every pass and loose ball, but judiciously picking the right moments. His simmering temper during Portugal's spluttering Group F draws spoke of a man straining for something that is not quite there.

Against Austria at the Parc des Princes, where a torrid night a concluded with him missing a penalty and having a goal chalked off for offside, Ronaldo raged in the face of a flaccid statement. The Cristiano 3 Zlatan 2 version would have done something about it. He could not, amid scattergun shots and blurred decision-making.

It is a level he will probably never reach, but Bale - grinning his way through multiple Euro 2016 media briefings as his microphone-hurling fellow forward broods away from prying eyes - might be the closest approximation to vintage Ronaldo in the game today.

The 26-year-old has stepped up repeatedly to haul Wales into uncharted territory. Aaron Ramsey's suspension for Wednesday's match means he must do so again.

Bale has attempted 34 dribbles and runs during Euro 2016 to Ronaldo's nine and registered a staggering 85 to his colleague's 12 during qualification. These numbers suggest it is he who now approaches matches featuring 22 grown men as if he is the best kid on the school playground.

Empowered by his position as a national icon, Bale brought some of this verve to the Spanish capital last season as - for reasons beyond sane analysis - the idiotic boo-boys turned their fire from him and briefly towards Real Madrid's all-time leading scorer.

As Bernabeu top dog, Ronaldo's position is safe for the foreseeable future. But if Bale inspires a win for Wales in Lyon, he would move to within touching distance of a trophy eluding his team-mate, in all probability, for the last time.

Bale would shift firmly into Ballon d'Or contention, muscling that little bit further on to the master's turf. Madrid and the world are watching.