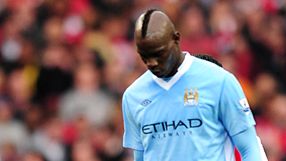 "I'm very sorry for what happened because of the disappointment it caused Manchester City and especially [manager] Roberto Mancini for whom I want the best and who I admire," Balotelli said through his agent Mino Raiola.

The player, already left out of the Italy side once by coach Cesare Prandelli after getting into trouble at his English Premier League club, did not think his latest misdemeanour would cost him a place at Euro 2012 in June.

"I haven't broken the ethics code," said Balotelli. "I've already missed the national team once because of an act of stupidity, I won't do it a second time.

"As for my future at the end of the season, I will speak to the club and we will see."

Mancini said after Sunday's defeat that he would probably sell the striker at the end of the campaign.

Balotelli's antics have kept the front and back-page headline writers busy with a succession of on and off-the-field incidents all season.

The Italian was lucky to stay on the pitch as long as he did on Sunday after a dangerous studs-up first-half challenge on Arsenal's Alex Song that the referee did not see.

Two separate yellow cards later for nasty challenges on Bacary Sagna meant he was dismissed in the 90th minute and the defeat has almost certainly scuppered City's title hopes.

Mancini said last week that if he had been a team-mate of Balotelli in his own playing days he would probably have ended up punching him and even now he does not speak to him every day "because if I did I would need a psychologist".