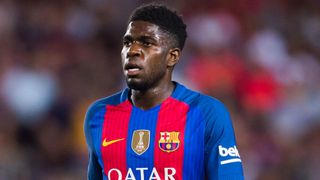 Barcelona will have to make do without the services of Samuel Umtiti for the next three weeks due to a hamstring problem.

The centre-back suffered the muscular issue while away on international duty with France this week and was forced to pull out of the squad for Friday's World Cup qualifier against Sweden.

Umtiti returned to Barcelona to undergo a series of tests to determine the extent of the injury and the reigning Spanish champions have now announced he faces a three-week spell on the sidelines.

"First-team player Samuel Umtiti has suffered a ruptured muscle in the femoral biceps of his left leg," a statement on the club's official website reads.

"The player underwent medical tests on Thursday which confirmed the injury.

"Umtiti is expected to be out of action for three weeks."

The hamstring problem will see Umtiti miss the games against Malaga, Celtic, Real Sociedad and Hercules, while he becomes a doubt for the match versus Real Madrid on December 3.

The 22-year-old joined Barcelona from Lyon during the close-season and has made 10 appearances in all competitions for the Catalans since.

Barca are being plagued by injuries in defence, with Gerard Pique, Jeremy Mathieu and Jordi Alba all missing their 2-1 win over Sevilla at the weekend.