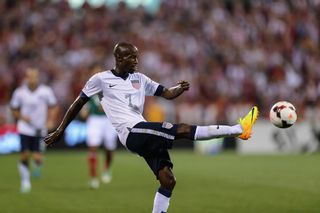 The Americans have already guaranteed qualification and sit on top of the CONCACAF group with 16 points from their eight games.

They play Jamaica on Friday before travelling to Panama on Tuesday for their final group match.

Beasley stressed the importance of performing well ahead of next year's tournament in Brazil.

"The mentality is still the same," Beasley said.

"We want to win our group and I think you can see that from the players he (coach Jurgen Klinsmann) selected for these two games.

"We want to finish on a good note. I would be lying if I said I wasn't a little bit more relaxed coming into this camp knowing that we have qualified.

"But right now the spots are for Brazil and everyone knows that there are 23 spots on that plane next summer and you want to be one of them that is playing, so hopefully we have a good performance against Panama and Jamaica and we keep everything on an even keel.

"These type of games, especially going away to Panama, are a good test for us. It is a different kind of atmosphere and the style of play is different from ours."

Meanwhile, Seattle Sounders defender Brad Evans says Friday's clash against Jamaica is a chance to firmly establish himself in the national team.

"There are only a couple of games until that roster is selected, so it is about putting in solid performances and hopefully solidifying your squad."