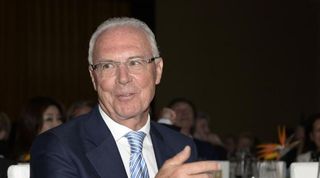 The Germany legend - formerly part of FIFA's Executive Committee - had initially failed to co-operate with a probe led by lawyer Michael Garcia looking into the validity of the process around the 2018 and 2022 tournaments being awarded to Russia and Qatar respectively.

In response, the governing body handed out a 90-day ban that prevented the 68-year-old from taking part in any football-related activity, forcing him to cancel his trip to watch the current showpiece in Brazil, where he was due to fulfil television obligations.

However, Beckenbauer's manager, Marcus Hofl, confirmed in a statement released via Twitter on Sunday that his client will answer the questions asked by FIFA's ethics committee by June 27, and expects the ban to be lifted as a result.

The statement read: "Franz Beckenbauer told FIFA on Saturday that he would answer the questions by the ethics committee investigation by June 27 at the latest.

"It is our understanding that there is thus no longer any 'suspicion of a possible violation' against FIFA rules so we are assuming that the provisional sanctions against him will be removed without delay.

"It was the first time that FIFA didn't know how to contact me on the telephone," Beckenbauer was quoted as saying in the statement.

"I had also assumed that I didn't have to answer the questions because I no longer have any official capacity at FIFA. But that's all cleared up now."