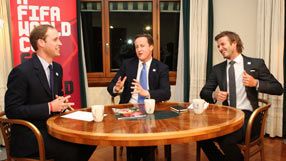 The Panorama programme broadcast on Monday offered what it said was new evidence over the ruling body's appointment of International Sports and Leisure (ISL) as its marketing arm.

Beckham said after meeting the FIFA president he was not worried the allegations could harm England's chances in Thursday's vote.

"What we made clear to him, and what he already knows, is that if we were to get this World Cup in our country in 2018, our media would be right behind us," Beckham told television reporters.

"I think he is well aware of the support that he will have for FIFA and for the World Cup."

England is up against bids from Spain/Portugal, Russia and Netherlands/Belgium in the 2018 process.

Hayatou denied the claim in an interview with Reuters on Tuesday, saying the programme had made a false accusation.

Beckham said Blatter had not expressed annoyance when the uncomfortable topic was brought up on Tuesday.

"Obviously... it was one of the topics we spoke about of course, and it is one of the things we cleared away."

Asked if Blatter had been annoyed, Beckham said: "No, he just mentioned it. Obviously, it's not the most comfortable thing to talk about, but I think he realises that a lot of it is obviously old stuff."