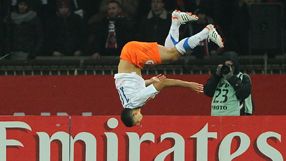 Morocco midfielder Belhanda was in a class of his own, scoring the first goal with Souleymane Camara adding the second to put Montpellier, who play their game in hand at Olympique Marseille on Wednesday, on 63 points with eight games left.

Champions Lille dropped seven points off the pace in third place after losing at Brest while fourth-placed Olympique Lyon narrowed the gap with Lille to three points when two Lisandro Lopez penalties earned them a 2-1 home win against bottom side AJ Auxerre.

Lisandro converted from the spot in each half with Alain Traore reducing the arrears before the break as Lyon revived their outside chance of clinching the Champions League play-off spot occupied by Lille.

Auxerre stay on 27 points, four points from the safety zone.

The title race looks set to be a two-way battle between PSG and Montpellier, who dominated throughout their match against Sochaux at the Stade de la Mosson.

Belhanda put the hosts ahead in the fourth minute, poking home after Pierrick Cros had parried away an Olivier Giroud attempt into the path of the Moroccan.

Modibo Maiga equalised with a volley in the 28th as relegation-threatened Sochaux tried to show they have what it takes to stay amongst the elite.

Montpellier came out with all guns blazing in the second half and when Pierrick Cros failed to block John Utaka's shot in the 55th, Camara was on hand to put the ball into an empty net.

Montpellier will be top going into Wednesday's clash at the Stade Velodrome.

Lille, who had won their last three league games to get back into title contention, slipped up at the worst moment.

Brest got off to a brilliant start when Omar Daf opened the scoring with a superb 35-metre shot after six minutes and Bruno Grougi converted a penalty four minutes later after a Franck Beria handball.

Dimitri Payet reduced the arrears with a low shot after being set up by Benoit Pedretti after 27 minutes.

But Alexandre Alphonse added a third for Brest 10 minutes into the second half and Rudi Garcia's side lost any chance of a comeback when Tulio de Melo was sent off for a second bookable offence in the 68th minute.

Fifth-placed Toulouse missed out on a chance to narrow the gap with Lille to three points when they slumped to a 2-0 defeat at Valenciennes that left them on 50 points.