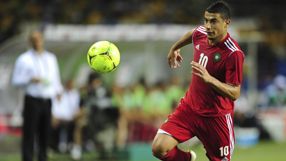 Belhanda suffered an adductor injury in training last week and doctors initially delayed a prognosis, sparking fears he might have suffered a serious setback ahead of their Group A encounter against Angola in Johannesburg at the start of the tournament.

However team officials said on Monday it had been a slight strain only and Belhanda, who helped Montpellier to the Ligue 1 title last year, would return to training on Tuesday.