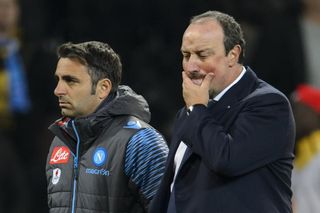 Benitez's side have failed to win more than half their matches in all competitions this season and after going down 2-0 to Young Boys on Thursday, the Spanish coach claimed he has seen a negative trend developing in his squad.

The 54-year-old reckons his team are taking it easy in games this season.

"We lacked the desire to win the game a few times this season. We have to improve in that respect," Benitez said.

"Am I worried? No, many things that happened today need to be revised to improve.

"The intensity starts from the strikers but often we lack it when defending and that allows our opponents to run on goal."

Young Boys scored both goals in the second half at home, registering their second victory of the Europa League group stage and joining both Napoli and leaders Sparta Prague on two wins and a loss in Group I.

Benitez was frustrated with his side's defensive effort - particularly in the lead-up to Bertone's strike.

"We lacked defensive intensity when they had scoring opportunities and that is why we conceded," he said.

"I expected a different game. We controlled the match but after the goal they clammed up.

"On the second goal we got the preventative marking wrong. This has happened in too many games now.

"In the first half we could've hurt them with our counter-attacks but after going behind we lacked the intensity and pace to avoid their counters."

The loss in Switzerland made it two games without victory for Napoli after they twice gave up a lead to draw 2-2 at Inter in Serie A on Sunday.