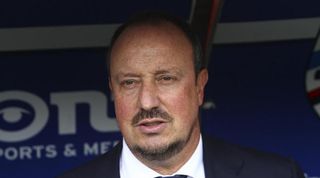 Goals from Marek Hamsik and Gonzalo Higuain helped the Serie A side maintain their perfect record in Group I.

Benitez's team are battling in eighth in the league, but the Spaniard hailed the approach they took into the clash in Slovakia.

"I really liked the attitude of my team. My lads were calm, even when maybe the environment around them wasn't," he told a news conference.

"The team was aware that we could go on only by doing things properly. Today we got a good result and we have to do the same in the next game."

Despite making it back-to-back wins,  Benitez refused to get carried away.

The former Liverpool manager said he was confident in the ability of his team, who have made a slow start to the season.

"The next objective is to win the next game. Let's take to the pitch with the same attitude as we had today," Benitez said.

"I am confident as we have a good team, and apparently, with some luck we can win many games."

Napoli host Torino on Sunday before travelling to San Siro to take on Inter after the international break.