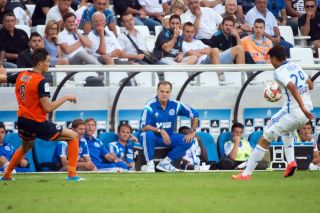 After setting his team out in a 3-1-3-3 formation in Marseille's opening round 3-3 draw at Bastia in Ligue 1 last week, Bielsa switched to a more conventional 4-2-3-1 for their clash with Montpellier.

The back four looked clueless in the opening half, however, with Montpellier taking the lead in the 18th minute as Anthony Mounier got in behind to cleverly clip Abdelhamid El Kaoutari's lofted pass over Marseille goalkeeper Steve Mandanda.

In their first match at the newly renovated Stade Velodrome, Marseille could not find a way back into the contest with Montpellier doubling their lead in the 68th minute when Mounier again found space on the left and set up Morgan Sanson for a simple tap-in.

While Bielsa admitted he still has work to do after just two competitive fixtures in charge of Marseille, the Argentine coach claimed his choice of formation "had no influence".

"The result was not the one we wanted but the game leaves much for us to work on," he said.

"At first we were just as good as our opponents and then in the later stages of the first half I think we were better than them and we had chances.

"I believe the formation had no influence. The centre-backs worked well but there were difficulties out wide [in defence]."

The loss saw Marseille drop to 16th in Ligue 1 and Bielsa conceded he would need to turn his side's form around quickly, otherwise the club and their fans would lose patience with the changes he is trying to make.

"I am aware, though, that any changes must be accompanied by results in order to progress," Bielsa said.

"I'm not satisfied. Losing to a team who could finish in the bottom half of the table is not a great result.

"After winning one point from a possible six the media claim the players are uncomfortable with the new methods, but there is nothing new. Only two or three players played poorly tonight."