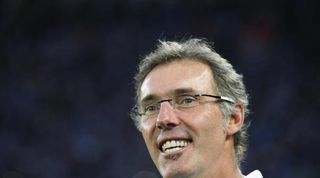 Their indifferent form has seen Blanc come under pressure, but PSG put in their best performance of the season to see off the Spanish giants at the Parc des Princes, despite again being without talisman Zlatan Ibrahimovic, who continues to struggle with a heel injury.

Goals from David Luiz, Marco Verratti and Blaise Matuidi were enough to overcome Luis Enrique's side and put PSG in control of Group F.

And Blanc was quick to praise his squad for their togetherness after an enthralling affair in the French capital.

"It was a great match, a great win," said the former France boss.

"We needed the points. The players were more focused and motivated than usual - all the ingredients were there for a great performance, but we still had to go out there and do it.

"I was convinced the team hadn't lost all its virtues.

"The most important thing for me tonight was to show that we are still a team."

David Luiz's first goal for PSG broke the deadlock after 10 minutes on Tuesday, and the ex-Chelsea man echoed Blanc's sentiments on his new team-mates' attitude.

"The team was excellent this evening. We hadn't been playing our best recently, but tonight we saw the real Paris Saint-Germain. It was a fantastic night," said the Brazil defender.