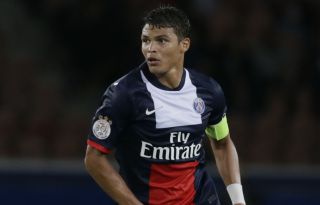 Thiago Silva, 29, has not played since sustaining a thigh injury in their 1-1 draw with Monaco last month.

PSG are still yet to lose in any competition despite the Brazil international's absence.

And Blanc, speaking ahead of Wednesday's UEFA Champions League clash at Anderlecht, revealed that the former Milan man's rehabilitation is going to plan.

"The evolution of Thiago is fairly positive," he said.

"He has a great morale and in his rehabilitation all is going well."

Still, Blanc insists that progression to the knock-out stages is not guaranteed even if they secure victory at the Constant Vanden Stock Stadium.

"I say to all the players that all matches will be difficult because teams want to beat us," he added.

"I think that it's going to be the case tomorrow. They have players of great quality.

"Even with a positive result, there would be uncertainty over qualification."