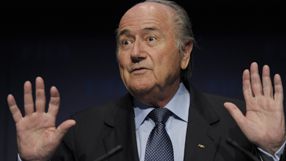 He added that collusion was difficult to exclude from the World Cup bidding process and that, once forced into action, FIFA had responded well to newspaper allegations of vote-selling in the contest to host the 2018 and 2022 World Cups.

The hosts of both tournaments will be decided at a FIFA vote on December 2, a huge occasion in which leading political figures, including heads of state, from all nine bidding nations will be present.

"The World Cup is not only a footballing, emotional competition, where people assemble, they dance, they are happy," said Blatter, who has already conceded FIFA was wrong to choose both hosts at the same time.

"December 2 is not just an important date for football, it is important for international politics.

"We have nine bidding countries for the 2018 and 2022 World Cups, they will send their top representatives, we have to deal with nine countries sending prime ministers, heads of state and other high-ranked political personalities."

"We have a political dimension and we have to look to avoid in the future such situations, this is an item under scrutiny.

"With experience in life, you should not repeat twice the same error."

Executive committee members Amos Adamu of Nigeria and Reynald Temarii of Tahiti were accused last month of offering to sell their votes to undercover reporters from the Sunday Times posing as lobbyists for an American consortium.

Temarii was banned for one year and fined on Thursday after FIFA's ethics committee found him guilty of violating rules on general conduct and loyalty while Adamu was banned for three years and fined after being found guilt of corruption.

With voting for the World Cup hosts restricted to the executive committee, it means that only 22 officials, not 24, will choose the hosts of the two tournaments.

Blatter was not happy with the newspaper's methods, even though he admitted FIFA had been forced to act.

"It gave us the opportunity to clean a little bit whatever has to be cleaned but I cannot say it is very fair when you open traps for people," said Blatter, adding that he was satisfied with the ethics committee's decisions.

"It is not fair but when the aims and objectives are to have a clean sheet in the football, then I can understand."

FIFA also looked into allegations of collusion between Spain/Portugal, one of four bids for the 2018 World Cup, and Qatar, one of five candidates for 2022, but found no evidence of rule breaking.

"You cannot avoid collusion but if there should be something wrong in such collusion, then naturally somebody should intervene," said Blatter.

"You find collusion in politics, in elections, when two parties are enemies during the year and then they run together."

England, Russia and Belgium/Netherlands are also bidding for 2018 with Japan, South Korea, United States and Australia the other candides for 2022.