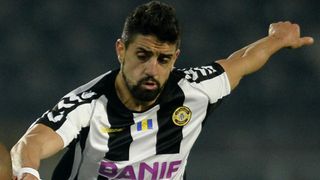 Portuguese forward Marco Matias - fourth in the Primeira Liga goalscoring standings - netted the only goal of the match five minutes before the break, taking his season tally to 16.

"It was an extremely difficult game," Matias told Sport TV. "It was a bit different, synthetic, but we are professionals, we have to be accustomed to all sorts of circumstances. We were happy and fulfilled our role."

Nacional's win at Estadio do Bessa on Sunday helped the club up to ninth in the table, three points adrift of sixth-placed Pacos de Ferreira with one round remaining.

With Sporting Lisbon (third) and Braga (fourth), who have already qualified for Europe, set to contest the Taca de Portugal final on May 31, a Europa League spot is to be filtered down to the sixth-best team in Primeira Liga.

Nacional must beat Pacos on Saturday and hope Belenenses lose at relegated Gil Vicente in order to stand any chance of qualifying for UEFA's second-tier competition.