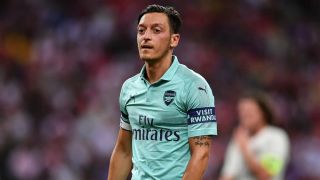 Ozil announced his retirement from international football last Sunday citing a "feeling of disrespect" for his Turkish roots as forcing the decision.

The 29-year-old slammed the media and was particularly critical of DFB president Reinhard Grindel, accusing him of incompetence and insensitivity toward his heritage.

But the manner of Ozil's series of public statements did not go down well with Bobic, who now serves as Eintracht Frankfurt's sporting director.

"He could have given an interview somewhere, live on TV. For us footballers, the rule is 'be a man and stand up'."

Feeling proud to be captain today.  Good win and another fantastic support here in Singapore July 28, 2018

Ozil's retirement came in the wake of criticism from the DFB over the pre-World Cup photo he took with controversial Turkish president Recep Tayyip Erdogan, which the Arsenal midfielder insisted was non-political.

"That's something I would allow for a player who is 18 or 19," he said. "But a player who has been in the business for so long, 29-years-old and world champion, needs to know what that implies.

"If he does not know that then he's either totally naive or it is calculating and he wanted to provoke [a reaction], or else he is controlled by others.

"Of course I understand the two [German and Turkish] hearts that beat in his chest but you still have to know that you have a big responsibility."