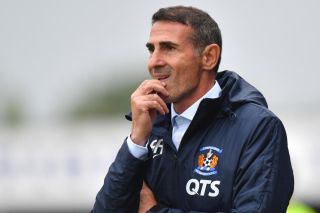 Kilmarnock keeper Laurentiu Branescu admits he is fed up of hearing about last season’s record breakers.

The on-loan Juventus stopper was Angelo Alessio’s first signing this summer but the Italian boss has already come under pressure as his side struggle to live up to the feats of Steve Clarke’s men last term.

The new Scotland manager departed Rugby Park having guided Kilmarnock to their highest finish since 1966 and qualification for Europe for the first time in 18 years.

But their Europa League adventure failed to get off the ground under Alessio as they were dumped out by Welsh minnows Connah’s Quay Nomads, and the former Juventus and Chelsea coach’s new team are preparing to face St Johnstone this weekend bottom of the Ladbrokes Premiership, having taken just one point from their first three games.

Branescu is confident Kilmarnock can turn things around, but declared the comparisons to the side which finished third under Clarke with a record points tally are unhelpful.

The Romanian said: “I expected it to be a difficult season because it’s not easy to repeat what happened before.

“The media, the fans, everybody around the club expected more from us. Everybody speaks about last year but a season like that can happen maybe once in 10 years.

“It’s not easy to repeat that so it’s important that we stay together as a team and take it game by game to get points.

“If the guys in the team at this moment want to be remembered for another good season and not a bad one we need to be strong together.

“It’s normal to have some difficulty at the start of the season. We’re not a big club with hundreds of millions in our budget or a David Silva in our team.

“We have very good players and I like them all because they are very hard workers. Together we can move up the league.”

Kilmarnock have an injury crisis ahead of their trip to Perth, with centre-backs Kirk Broadfoot and Stuart Findlay ruled out through injury.

Greg Taylor may also have played his last game for the club, with the Celtic target a major doubt with a hamstring injury. Branescu will be sad to see the £3million-rated left-back go if he does depart before Tuesday’s transfer deadline.

“Greg is a young guy but already has a lot of experience like playing for the national team,” he said.

“I read a lot of rumours around him but I wish the best situation for him.

“What he wants to happen for himself is normal because if maybe I’m in his position, maybe I feel the same.

“For the moment he is here so he must give his all for the Killie T-shirt until his last day here. We must all do this.

“I don’t know what will happen because it’s not my business but I hope for him it will be good.”