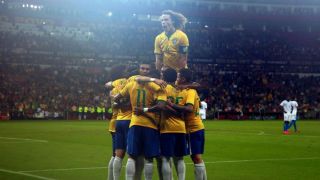 Brazil edged out a stubborn Honduras 1-0 in their final pre-Copa America warm-up match on Wednesday.

Roberto Firmino continued the impressive start to his senior international career with Brazil's only goal in an otherwise rusty performance that saw coach Dunga visibly frustrated on the sidelines at various points in Porto Alegre.

Firmino struck in the 33rd minute after a rampaging run down the left from Filipe Luis, with the Hoffenheim attacking midfielder finishing smartly between the legs of Honduras goalkeeper Noel Valladares.

Since making his debut in November, Firmino has played six matches for Brazil and scored three goals.

Wednesday's win was Brazil's 10th straight and came just three days after they accounted for Mexico 2-0.

It also saw Dunga maintain his perfect record in his second stint in charge since taking over after last year's World Cup.

The hosts became more dominant as the match wore on at the Estadio Jose Pinheiro Borda, finishing the game with 65 per cent possession and 15 shots to Honduras' seven, but in worrying signs for Brazil, there seemed to be a lack of precision in the final third.

Honduras made it difficult for the home side with their physical approach, with the visitors conceding 22 fouls, but Dunga will undoubtedly be looking for a better performance when his team start their Copa America campaign against Peru on Sunday.

With the CONCACAF Gold Cup looming next month, Honduras coach Jorge Luis Pinto has just one more friendly to prepare his team, as they host Mexico on July 1.