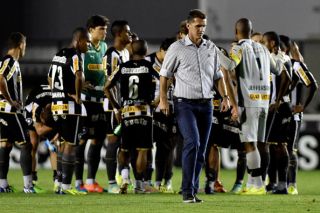 Second-bottom Botafogo - winners of the top division in 1968 and 1995 - were condemned to the Serie B after losing 2-0 to Santos at the Estadio Urbano Caldeira in the penultimate round of competition.

The loss - Botafogo's 22nd of the campaign - left Vagner Mancini's men six points adrift of safety with one match remaining.

Leandro Damiao was the hero for Santos, scoring twice in the second half to end the team's seven-match winless streak.

The deadlock was broken three minutes after half-time, with Leandro Damiao curling a low shot past Botafogo goalkeeper Jefferson.

Leandro Damiao completed the scoring in the 90th minute, fumbling his initial effort before firing the ball into the roof of the net.

Bahia kept their survival hopes alive thanks to a narrow 1-0 win at home to slumping Gremio on Sunday.

Gremio were reduced to 10 men in the 29th minute and Bahia pounced three minutes later with Rafael Galhardo giving the hosts a much-needed victory.

Bahia - third from bottom - are two points from Palmeiras and safety ahead of next week's final round.

Palmeiras - one point clear of fourth-bottom Vitoria - were beaten 2-1 by third-placed Internacional on Saturday.

Vitoria crashed to back-to-back losses, routed 4-0 at Flamengo on the same day.

Meanwhile, champions Cruzeiro played out a 1-1 draw at Chapecoense.