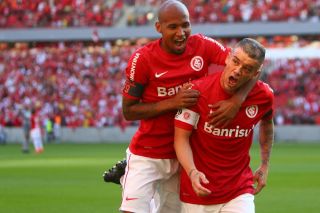 Abel Braga's men are up to fifth position with 19 points from 11 matches, six points adrift of reigning champions Cruzeiro, who edged Palmeiras 2-1.

Two goals in as many minutes from Ricardo Goulart and Manoel proved the difference as Cruzeiro accounted for Palmeiras away from home.

Cruzeiro are now five points clear of Corinthians, who were held to a goalless draw by fourth-bottom Vitoria on Sunday.

Internacional made a disappointing return to action following the FIFA World Cup break, losing 2-1 to Corinthians on Thursday.

But Internacional set out to put that result behind them and they made an ideal start thanks to Moura's 16th-minute opener, with the 31-year-old striker firing the ball into the net from inside the six-yard box.

The home side doubled their lead on the stroke of half-time when D'Alessandro converted a penalty after Flamengo defender Chicao was sent off for a rash challenge inside the area.

Internacional only had to wait 13 minutes into the second half for their third goal, with D'Alessandro picking out Fabricio at the back post before the defender volleyed the ball past goalkeeper Felipe.

The three-time champions completed the rout in the 78th minute, when Alex poked in from close range.

At the Estadio Municipal Paulo Machado de Carvalho, Goulart and Manoel were the stars of the show as Cruzeiro made it four wins in a row.

Goulart made the breakthrough in the eighth minute - his seventh goal in as many games for Cruzeiro to make him the league's top scorer - and Manoel heaped more misery on Palmeiras just two minutes later with a goal of his own.

Argentinean defender Fernando Tobio pulled a goal back for the hosts in the 54th minute but it mattered little as Palmeiras were condemned to their fourth defeat in five games.

In other results, second-half goals from Marcelo and Douglas Coutinho helped Atletico PR to a 2-0 victory over Criciuma on Sunday.

The result also lifted Atletico PR to fourth in the table, level on points with Fluminense, Internacional, Sao Paulo and Gremio.

Fluminense had Dario Conca to thank after the former Guangzhou Evergrande midfielder helped the team to a 1-0 win at home to Santos.

As for Gremio, Giuliano's fourth-minute effort was the difference as the visiting team downed 10-man Figueirense 1-0 on Saturday.

Elsewhere, Luan's 66th-minute equaliser earned Atletico Mineiro a 1-1 draw against Bahia after Titi had given the visiting side a first-half lead.

Botafogo were 1-0 winners over second-bottom Coritiba courtesy of Mario Bolatti's goal in the 12th minute.

Meanwhile, Goias and Sport Recife played out a goalless stalemate - only the pair's second draw in 12 previous league meetings.