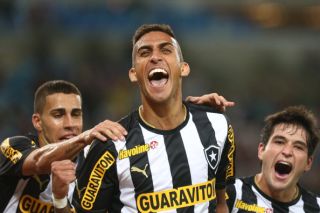 Botafogo extended Coritiba's winless streak in Brazil's top tier to six games, scoring three goals in the opening 50 minutes and resisting a brief comeback from the visitors, who converted a penalty just before the hour mark.

The win took Botafogo to third with 33 points, four points adrift of leaders Cruzeiro and just behind second-placed Atletico PR on goals scored.

Rafael Marques opened the scoring in the 14th minute on Thursday for Botafogo and the lanky 30-year-old forward was critical to the home side doubling their lead five minutes before half-time.

A chipped pass over the top of Coritiba's midfield found Marques in the left channel and the former Omiya Ardija attacker burst into the box and dinked a cross to the back post where Hyuri headed home.

Hyuri made it 3-0 for Botafogo in the 50th minute with a brilliant goal.

The 21-year-old received took a pass from Bolivar on the right-hand side, drove into Coritiba's defensive penalty area, spun and rolled past three defenders and then scored from a tight angle.

Coritiba were given a lifeline in the 55th minute when Botafogo's goalkeeper Renan was sent off for a foul on Gil as the visiting midfielder looked set to score.

The visiting captain Alex converted the resultant penalty past replacement goalkeeper Milton but despite the goal, Coritiba never got close to a draw and Botafogo claimed their first win in four games.

Leaders Cruzeiro notched their fourth consecutive victory with a 3-1 triumph away to Bahia with goals from Borges, Everton Ribeiro and Julio Baptista, while Atletico PR matched that streak with a 2-1 win over Santos.

Marcelo and Marco Antonio scored for Atletico but they had to survive a nervous finish to the match after Emerson struck in the 87th minute for Santos.

Bottom-placed Nautico lost their sixth straight league game with a 3-0 defeat to Vasco da Gama, while Flamengo overcame Vitoria 2-1 and reigning champions Fluminense could only manage a 2-2 draw away to Atletico Mineiro, who had both their goals scored by Ronaldinho.