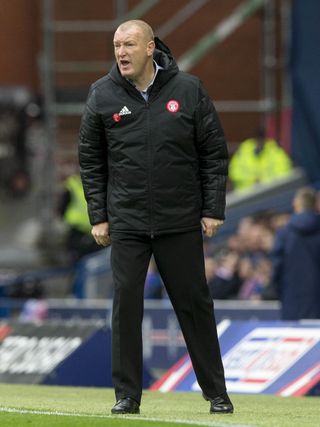 Brian Rice hailed Hamilton’s attitude after they battled back to secure a 1-1 draw against Hibernian in the Ladbrokes Premiership.

Accies were thrashed at Rangers before the international break but despite going a goal down at home to Hibs, they refused to let their heads drop and secured a vital point courtesy of Ross Cunningham’s second-half penalty.

The Lanarkshire side are annually tipped for relegation but their continued presence in the top-flight is testament to the strong mentality within the squad.

“You saw Hamilton means something to those players in the dressing room. They give everything for that jersey out there and don’t leave anything on the pitch,” Rice said.

“I couldn’t ask for any more in terms of effort and commitment. I demand a lot and they give me everything – every day.

“We don’t have the best players in the league but we’ve got a spirit and a desire.

“We went to Tynecastle and came back from 2-0 down to get a point. We went behind against Livingston but came back and won, and came back to draw today. The players have that commitment and desire not to get beat.”

Hibernian were excellent during the first half and deservedly went ahead after 21 minutes through a trademark strike from range by Stevie Mallan.

But it proved to be the same old story for Hibs as academy graduate Cunningham smashed home a penalty after Mallan was adjudged to have fouled Blair Alston.

It capped an excellent week for the 21 year-old, who signed a new contract until 2022 earlier in the week.

He drew praise from manager Rice, who said: “I’m delighted for him.

“He had a few injury issues when I came into the club but we’ve resolved all that, he’s back fit and enjoying his football again.”

Meanwhile, Hibernian manager Paul Heckingbottom insisted he is happy with Florian Kamberi after the striker revealed he might have to quit the club to preserve his international ambitions with either Switzerland or Kosovo.

“Every single player at every single club wants to start,” Heckingbottom said.

“Any footballer who doesn’t think like that are going to end up at the lowest level possible where they play every week.

“You’ve got to have some drive and ambition but Flo is fighting tooth and nail to get in the team. He wants to be here, he wants to be playing for us and he wants to be in our team. That’s all that matters.”