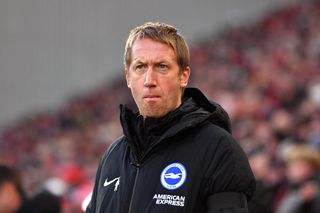 Graham Potter fondly remembers the FA Cup final as the greatest day of the year but is not yet dreaming of a Wembley return for Brighton.

Albion reached the semi-finals of the competition last season under former manager Chris Hughton where they were narrowly beaten at the national stadium by eventual winners Manchester City.

Seagulls boss Potter, who led Swansea to the quarter-finals last term, is targeting another cup run for his current side, although he is eager to avoid looking too far ahead.

The Premier League club have been handed a favourable third-round tie, with Championship side Sheffield Wednesday due to visit the south coast on Saturday.

“The cup is so special that anything can happen, that’s why it’s the best cup competition in the world,” said Potter.

“Of course we would like to go as far as we did last year, and maybe improve, that’s without question.

“But you don’t get there by thinking too far ahead, you focus on Sheffield Wednesday.

“I think it means probably my favourite day of the year, memories-wise, watching the FA Cup final.

“The games used to kick off at 3pm and you used to watch Grandstand, or whatever it was, beforehand and the whole build-up, I used to love that, sit there and that would be my day – the best day of the year for me.

“It was always special and I’m glad it’s maintained that, it’s a challenge in the modern era with the Premier League, but I think it still has its appeal.”

Brighton sit 14th in the top flight after finishing a hectic festive period with four points from home games against Bournemouth and Chelsea.

While he is keen to progress in the cup, Potter has suggested he will rotate his squad against the Owls in order to prevent players picking up injuries due to the packed fixture list.

“There’s a chance of that (changes). I think it’s about recovery times, some guys have played a lot and it’s just so intense to ask them to recover again,” he said.

“It’s hard and you’re exposing yourself to injury – the worst thing that could happen to us would be to lose two, three, four players because that can have an effect on you in the upcoming weeks and months.

“We’ve got a good collection of players, they’re all fighting to play and we need to make sure that we’ve got a good team on the pitch that can win the game, because that’s the priority.”

Albion will be without defender Dan Burn after he suffered a fractured collarbone in the 1-1 draw with Frank Lampard’s side on New Year’s Day, while winger Jose Izquierdo (knee) remains out.