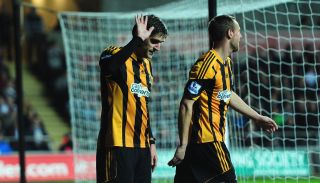 The Sunderland loanee had not found the net since Swansea's League Cup semi-final win over Chelsea in early January, but returned to the Liberty Stadium with a ninth-minute goal on Monday.

It was not enough for victory as Chico Flores inadvertently turned Jonjo Shelvey's fierce cross in with his arm before Hull also saw strong handball claims against home defender Dwight Tiendalli in his own penalty area rejected.

While Bruce was upset with much of the officiating in Wales, he was delighted to see Graham get on the scoresheet, and hopes to see it more regularly.

When asked if he thought the striker was destined to score against his old club, Bruce explained: "That's why he played.

"Football has that knack, he had a great time here, had a big-money move to Sunderland and it has not quite happened for him.

"Today will do him the world of good. Maybe it is something in the Swansea air, he usually scores in clutches so let's hope he can do on a run now.

"He's a good player, every top player goes through a spell like he has had. When he moved he was not a regular at Swansea, so it takes him a while to get up to speed.

"In that respect it was probably the worst time to get his move. It did not quite happen or him in the north east, but I know how that feels."