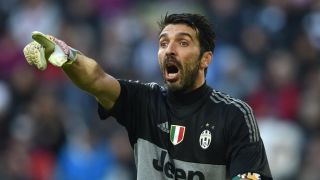 Juventus captain Gianluigi Buffon has admitted his side are underdogs against Bayern Munich in the Champions League last 16.

Serie A champions Juve have recovered from a patchy start to the season to reel off 12 successive wins in domestic competition.

However, goalkeeper Buffon is wary of Pep Guardiola's Bayern Munich in the Champions League.

"We don't have the best of chances, that’s for sure," he told the Gazzetta dello Sport. "We must be angry, clinical and have a bit of luck to overturn the predicted result."

On their domestic hopes, Buffon believes Inter and Napoli are their greatest rivals for the Scudetto, while Roma could be cast adrift if Juve beat them on Sunday.

Buffon added: "The team at the top of the standings seems to change every week.

"Inter don't have to worry about European competitions, something that will have a big say on the championship.

"Napoli are a cohesive side, one of the best attacking teams in Europe and Maurizio Sarri has brought security to their defence. Napoli can win the title.

"The further away Roma are, the better it is for us. If we win [on Sunday] they will be 10 points back. It would be key because we are talking about a dangerous side."