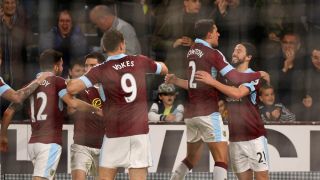 George Boyd scored the only goal as Burnley edged past Stoke City 1-0 at Turf Moor on Tuesday to move away from the Premier League's relegation zone.

Sean Dyche's side had not won in their last seven league matches to slip to 15th in the table and were in urgent need of three points against their mid-table visitors to release growing pressure.

A single goal was always likely to decide a scrappy affair that featured few clear-cut chances and it came after 58 low-quality minutes.

Boyd made no mistake with a smart finish from close to the penalty spot after Jeff Hendrick beat two Stoke players and crossed for the winger to turn home a low first-time shot.

Despite plenty of effort from the visitors a leveller never looked likely and Stoke's nine-game unbeaten run in away league games against newly-promoted sides came to an end.

Victory moves Burnley eight points clear of the relegation zone and they jump to 12th, a single place behind Stoke in the table, with both teams having seven games to play.

A quiet first 15 minutes featured no shots from either side before Marko Arnautovic saw a long-range effort blocked by Ben Mee, who then headed Steven Defour's deep free-kick at Lee Grant.

Arnautovic should have capitalised on a Stoke break from a dreadful Defour corner after 28 minutes, but the Austrian's control let him down when played through by Saido Berahino.

Tom Heaton made a comfortable save from Charlie Adam's header after 37 minutes and the midfielder drove straight at the hosts' goalkeeper from distance shortly afterwards as both teams continued to cancel each other out in a tight first half.

The poor standard of the game was summed up by Adam tripping over and handling the ball while taking a corner early in the second period.

Adam hit a first-time shot wide after 54 minutes when picked out in the box by Arnautovic, who then flicked a header off-target after Michael Keane could only nod the ball up in the air.

Burnley had failed to score in their two previous matches, but the deadlock was broken by Boyd just before the hour.

Hendrick burst through two challenges in the left channel and slid a low cross into Boyd's path, the winger beating former Burnley goalkeeper Grant with his placed strike.

Grant had to scramble to keep out Hendrick's deflected shot as the hosts sought a second goal and Mark Hughes turned to veteran striker Peter Crouch in a bid to force an equaliser, but the hosts held on.

A first win in any competition since January will bring relief to Dyche and his men, who have now collected 35 points, more than the team managed in each of their two previous Premier League seasons.