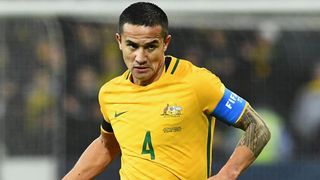 Australia coach Ange Postecoglou hinted Tim Cahill and Tom Rogic will come into the starting line-up for the crunch second leg of the World Cup play-off against Syria in Sydney on Tuesday.

Both attacking stars were left out of the Socceroos team that drew 1-1 with Syria in Melaka last week, with Rogic coming on for a cameo in the final minutes.

Postecoglou suggested he was going to rotate his squad, with Cahill and Rogic strong chances to be called upon to help keep the nation's World Cup dreams alive.

"[Cahill starting is] an option for us," Postecoglou told a news conference on Monday.

"We obviously kept a few back the other night. It's the way we've chartered our course through qualifying process, with different formations and players at different times.

"Tim's one of those who didn't play the other night and is raring to go. But there are a few we can look to in terms of selection.

"[Rogic's] been pretty significant for us and contributed with goals and assists and you look at the Thailand game and on another night we could've had two or three goals.

"I think he's maturing in the right way and from an international standpoint it's only been the last 12-18 months since he's come into more prominence.

"I expect him to become a more and more important player to us."

Postecoglou, who will step down at the end of the World Cup cycle, has come under intense media scrutiny for the use of a three-man defence and the team's failure to qualify automatically for Russia.

But the 52-year-old explained he was not about to change his methods despite his side's precarious position.

"I won't be going into it with a different mindset because it's an absolute privilege and honour to coach your country," he said.

"I've coached my nation for 11 years, more than club football - every game is special, I treat every game as if it's my last.

"If it is tomorrow night, so be it. But that's not the plan."

The winner of Tuesday's play-off will face the fourth-placed qualifier in CONCACAF – currently Panama – to secure a spot in Russia.