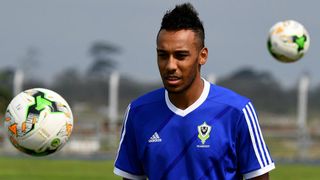 Africa Cup of Nations hosts Gabon head into their final group game against Cameroon knowing only a win can guarantee their progression to the quarter-finals.

Jose Antonio Camacho's side have drawn their opening two Group A matches, and now risk suffering a humbling early exit.

The Gabon team had been looking to lift a country hit by violence after last year's contested presidential election, but, amid calls to boycott the tournament in some quarters, Pierre-Emerick Aubameyang and his team-mates remain focused on delivering success.

"We have come here to play for Gabon," goalkeeper Didier Ovono told AFP. "There will be time after the Africa Cup of Nations to dress the wounds.

"The point of view of the call for a boycott, for me, is legitimate, but, for us as footballers at this moment, we need the people of Gabon to be behind us.

"Pierre is at a point where he needs to be 100 per cent focused on his football. He has chosen to stay silent, but he shows out on the field that he is 100 per cent with us and that is the most important thing."

Cameroon, who beat Guinea-Bissau after drawing with Burkina Faso, will reach the quarter-finals if they avoid defeat against the hosts, but Hugo Broos' men are hunting only a win.

"I think the biggest error we could make would be to play for a draw," the Cameroon head coach told Canal Plus Afrique. "That is too dangerous. We will go out to win without doing anything stupid."

Slavia Prague defender Michael Ngadeu-Ngadjui was the hero at both ends as Cameroon came from behind to Guinea-Bissau, making a crucial block at one end before netting the winner at the other.

The 26-year-old will be vital to any result against the hosts as he does battle with one of the continent's star performers in Aubameyang.

Having netted in each of Gabon's opening two group games, Aubameyang has only further secured his place as the host nation's key man.

The Borussia Dortmund man has 15 Bundesliga goals so far this season, and will hope his strikes are enough to secure victory at the third time of asking.

- Gabon won their only previous encounter with Cameroon at the AFCON; it was in the 2010 group stages (1-0).
- Edgar Salli's 92nd minute strike helped Cameroon secure a 2-1 friendly victory over Gabon in their most recent encounter (September 2016).
- Cameroon come into this match having ended a six-game winless streak in the African Cup of Nations (D4 L2); seeing off Guinea-Bissau in the most recent outing (2-1).
- Cameroon have the opportunity to go unbeaten across their opening three matches of an AFCON for the first time since 2006; they were knocked out of that competition in the next round however (quarter-final v Ivory Coast).
- Gabon are currently enduring a four-game winless streak in the African Cup of Nations (D2 L2); they have never been on a longer run without a win.